2014 AFC Challenge Cup qualifiers: India to give '200 percent' for Mission Possible against Myanmar 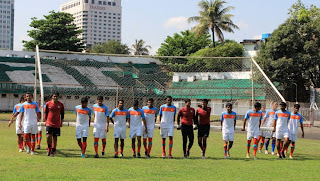 India coach Wim Koevermans watched Myanmar after both of India's matches at the Yangon Training Centre. The boys watched them on a local television channel in their rooms. "They are a very tough team," all agree.

"At the back of the mind, you may be forced to think about a draw which will see us through. But we won't play for a draw," Koevermans utters to his boys.

For the record, India are top of the Group with six points from two matches while Myanmar, placed second are on four points. The top team from the Group qualifies for the 2014 AFC Challenge Cup which is to be held in Maldives, while two of the five best runners-up also qualify.

"In such a match, there's no place for any errors on the field. We need to keep possession and not give it away easily. In the last two matches, we have been casual at times to gift away the ball to our rivals. Against Myanmar, we can't do that," Mehtab Hossain who has been omnipresent on the green in the last two matches, echoes.

There are others too who are sitting in his room – Captain Sunil Chhetri, Syed Rahim Nabi, Shouvik Ghosh and Alwyn George.

"Let's not forget they will have support from the stands and from what we saw, it's a noisy crowd. Teams when backed by passionate fans can be very dangerous. That stays a big challenge for us," Chhetri echoes.

"It's an ultimate test for our temperament. In such a match, we need to give our 200 percent. And we will," Mehtab joins the conversation again. "It's understandable, they will go all out, they have little option."

Nabi adds, "Myanmar have their back to the wall. Such teams are very dangerous. They have nothing to lose at the moment. As Coach has said, we won't play for a draw. We just can't."

"We need to begin from where we finished the Guam match," goalkeeper Subrata Pal mentions. "The match reminds me of our last Group League match in the AFC Challenge Cup against Turkmenistan in 2008 in Hyderabad. A draw could have seen us through but we won the match and then went on to beat Myanmar in the semis," he recollects. "We need to qualify at any cost."

"This match will define the next four years for us. If we don't go through, the doors of the Asian Cup 2015 will be closed for us. We will then have to wait for the next edition which will be held in 2019," Nabi pronounces. Chhetri walks up to put his hand on Nabi's shoulder. "Sunil, we cannot let this chance go," Nabi goes on. Chhetri taps his shoulder again. Mehtab was checking the studs of his boots by then.

"We've watched Myanmar and will stick to our Coach's instructions. We have toiled hard to reach to this stage. The next 90 minutes will be defining," Arata Izumi maintains.

"More than proving to others, it's more of a match to prove to yourself that you can," Mehtab opines. "They will be under immense pressure. We have to capitalise on that," Nabi complements him.

Despite playing two matches in three days, there's a buzz in everyone's steps. Even as the Medical Staff carry out the regular recovery sessions, everyone talks about the mission ahead; and they know, it's not impossible.

We turn to the 'baby' of the team – Gurjinder Kumar. Gurjinder has shown composure in his first two International matches and he too knows the importance of the match. "We had a meeting among the defenders. Paul's running commentary guides me on the field a lot as does Gouramangi's instructions," he informs. "I'm more mature as a player and feel so much confident after being picked for the National Team."

Clifford Miranda joins in. When reminded of his two goals in last three International matches, he smiles. "We have to believe in ourselves and play to our potential. There's no reason why we can't. After all, we have come here with that sole aim," he declares. There's appreciation from everyone.

The squad has been staying away from their families for almost a month. And though a Preparatory Camp followed by a Tournament may seem a glamorous one, reality bites. In a diversified country as India where every player, perhaps has a different eating habit, the food in Myanmar, though off good quality, hasn't suited taste buds of many. But they have never complained.

It's all for the mission, a mission which they know isn't impossible. But to overcome it, you need to be together.