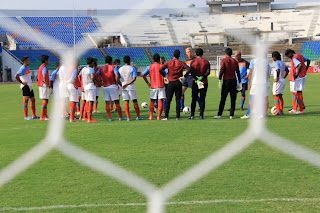 "Come over boys", coach Wim Koevermans gestures with his hand. And then it's a sprint for Team India to get to him.

"I'm happy with the intensity. Only be careful, don't ever switch-off, even in practice. Even if you switch-off for three seconds, you're gone," Wim says in one breath. Some have hands on their hips, some have them folded back; most wipe off the sweat, but all listen.

"OK. Now's let get back," Koevermans utters. Again, you just cannot miss the sprint. And then, it begins. Lenny Rodrigues to Francis Fernandes, back to Lenny, forward to Alwyn George, an one-two with Jeje Lalpekhlua, back to Jeje, a floater to Alwyn and he volleys it in. Everyone claps, Koevermans whistles.

The clean and green of Yangon will strike you at every step. Once a part of undivided India, some of the Houses built during the British regime will remind you of good old Kolkata. But more than Kolkata, it's the Dooars which hit you at every step, specially the Houses. Gouramangi Singh says, "It's more like Manipur," while Syed Rahim Nabi admits, "We will never have this back in Kolkata. Everyone is following the traffic rules. I haven't heard anyone honk as yet."

Rules? Well, they are always meant to be broken. "There can't be any fixed pattern of play," Koevermans stays consistent. "You need to adjust according to the situation." The videos keep the boys interested even as Koevermans' hands, nimble, shuffle the magnets on the tactical board.

You take a walk round the Official Team Hotel. Mehtab Hossain maintains, "The AFC Challenge Cup is the most important tournament for us." Cliffird Miranda agrees, "Very often, the first match of the Tournament sets the pace. We need to go all guns blazing against Chinese Taipei." Subrata Pal complements both. "We need to have confidence in ourselves. Nothing else matters. We are capable of doing it."

Captain Sunil Chhetri nods. "A team will always have mixed luck. We won the Nehru Cup as we played to our potential. Then, we were a bit rusty in the International Friendlies. But our quality stays. Had we not had them, we wouldn't have won the Nehru Cup, that too beating Cameroon in the Final, he pronounces. "We will do it," Denzil Franco echoes. Lenny, who with eyes wide open was switching his eyes from one to the other, was juggling with the ball by then. C.K. Vineeth didn't speak. He just listened.

You turn to Koevermans. "Have a drink, boys." This time, the boys don't sprint; rather they walk fast. You go nearby and overhear Clifford Miranda and C.K. Vineeth animated; discussing the timing of the release and the run. Nabi walks up to Jeje and puts his hand around him. "Your turn at that time was excellent."

At the breakfast table, Lalkamal and Nabi, use the salt and pepper sprinkler to discuss a dummy run. Arata joins in and gets drawn into it. You watch from a distance. Till the other day, he had a Japanese passport but here he is, for India's cause, the country which he "wanted to represent".

It's one big family after all!

With match-day approaching the buzz increases. Sanjay Dhyani, the Kit Manager stays busy arranging the Match kit, the Manager Sriniwas Murthy busy with the Manager's meeting, Gigi George, the Team Physio and Dr. Manabendra Bhattacharya, the Team Doctor enquire about niggles. But there aren't any. In midst of everything, there's a queue in Masseur Liaqat Ali's room, boys lining up to get rejuvenated. The Manager runs again to check about the ice-bath.

Koevermans, till then, just can't take his eyes off the videos. When he does, he scribbles something on his notebook. He has his final XI written on it.

The kick-off at the Yangon Training Centre is at 4pm local time (3pm IST) tomorrow afternoon.