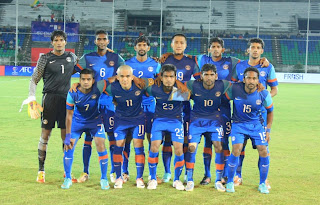 India suffered a 0-1 loss against hosts Myanmar in their final Group A qualifying match for the 2014 AFC Challenge Cup at the Yangon Training Centre. Substitute Soe Min Oo made the difference between the two teams in the 75th minute.

Courtesy the victory, Myanmar topped Group A with seven points and qualified for the final phase of the Tournament to be played in Maldives in 2014. India finished second on six points and have to wait for a few more days and finish as one of the two top second-placed teams.

"We have ourselves to blame. We just couldn't keep the ball and gave it away too often. It was a must-win match for Myanmar," a disappointed National Coach Wim Koevermans said after the match.

"But at the same time, we had three positive chances in the first-half and one in the second-half which hit the post. Against a team as Myanmar, you need to capitalise on them. If not, you will be punished. I congratulate Myanmar for the performance," he added. Myanmar were also alert to have made a goalline save in the dying minutes.

You can never counter what Koevermans said. India did start on a positive note. In the first half, they played the tactical game preferring to wait at times and trying to exploit the gaps in the Myanmar midfield. There was a penchant for stretching it to the flanks and the ploy worked. If you simply go by the number of chances created in the first half, the Indians had "three positive ones" each of them which could have yielded a goal.

The first one came in the 16th minute when Clifford Miranda's powerful blaster from inside the box thundered against the boards instead of the next. The next one came in the 43rd minute - Clifford, well placed inside the box to take a cracker, tried to find Sunil Chhetri allowing the Myanmar defence to recover. In the very next minute, Mehtab Hossain's through set up Jewel Raja on the right. Jewel entered the box with Sunil preferring to do the dummy. Much to the relief of the crowd, Jewel preferred to find Sunil rather than going himself and both the teams went into the resumption goalless.

These apart, there were series of corners earned in the first half along with a number of throw-ins around the Myanmar box, all of which were floated in by Raju Gaikwad. The closest India came was in the 35th minute when his throw venomously dipped and beat all even as Sunil Chhetri tried to flick it in.

Myanmar were quick in their counter-attacks. Gurjinder Kumar was yellow carded for tripping Kyi Lin from behind in the 17th minute. Lin was initiating a counter attack and had with a deft turn, got past Gurjinder.

Post resumption, Myanmar were off the blocks faster. The first positive chance came in the 51st minute but Subrata Pal, till then, not tested in the match kept at bay a Kyi Lin low shot. The nippy Lin interchanged all throughout and in the very next minute almost laid the platform for Myanmar to take the lead but Kaw Zayar Win failed to tap in Lin's through from close. They were tense moments in the Indian camp and obviously, the decibel levels rose.

The Indians tried to regroup. Intercepting a counter-attack, Chhetri laid it for Jewel in the box but the latter instead tried to find Chhetri instead of pulling the trigger.

In between, Denzil Franco was yellow-carded for pushing David Htan on the far right and then, Gouramangi Singh was yellow carded for tripping substitute Soe Min Oo just outside the box. But Myanmar failed to capitalise. Instead, Jewel almost put India in the lead. He latched on to the second ball off a Raju throw but his prompt right-footer hit the post and bounced back.

The goal came in the 75th minute. Myanmar, pressing hard, managed to float it in the box from the left and Soe Min Oo scored from a melee.

In the 80th minute, Arata followed a Raju throw-in and tapped in from close but only for defender Zaw Min to make a goalline save. Myanmar managed to hold on till the end.

There was pin drop silence in the team bus on way back to the Team Hotel. But as Koevermans summed it up: "We have ourselves to blame."