Mohammed Rafi: Santosh Trophy is a great platform for youngsters! 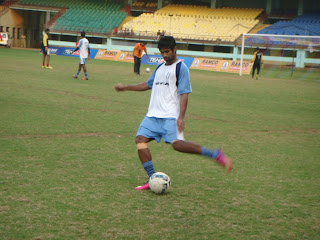 The fact that the 67th edition of the Santosh Trophy is full of youngsters is actually a blessing in disguise, according to former Indian international striker Mohammed Rafi.

"It's true that the big names are missing in the Santosh Trophy nowadays. But I look at things from a different perspective. There are so many young footballers who aspire to play for India someday, plying their trade in the Santosh Trophy. Look at our team (Maharashtra). Except me and (NP) Pradeep, all are youngsters and their talent is there to be seen. People point out that the partnership upfront between the two of us (he and Pradeep) is the main reason behind Maharashtra's success but that's not entirely true."

"Football is a team game and all these nine players as well as the substitutes are responsible for the team's success. They have been simply outstanding. I feel there is lot of budding talent in the Santosh Trophy and their proper grooming can only benefit India football in the long run," said the Dodsal FC forward who played for Maharashtra at the tournament for the first time.

Rafi, who was the Indian top goalscorer in the 2009/10 season of the I-League for now defunct Mahindra United, added that the secret behind his successful partnership upfront with another former India international N.P. Pradeep lies in the long-term on-pitch association between the two players from Kerala.

"We have been playing together for nine years now. For Mohammedan Sporting, Mahindra United and now for Dodsal. So the camaraderie on the pitch is because of that. We know each other very well in footballing terms that is and that's why we gel brilliantly."

Though Maharashtra bowed out of the semifinals, losing 2-1 to hosts Kerala in extra-time Rafi feels that the better team won though regretting his early exit from the tie owing to injury.

"Kerala played good football. So they won. I rue my early exit. I got injured unfortunately. This is my first season for Maharashtra. And we were doing really well. I thought we too fought in this match but was just not out day. The youngsters in the side listen to us (referring to himself and Pradeep) and we learn from them too. It"s a give and take policy."

"Having said that, I got emotional playing against Kerala, my home state, for whom I have played for three years in the Santosh Trophy. Obviously, I am a professional and switching allegiances is part of our job. But deep down in your heart, you do feel something for your native land. Added, the crowd here love football and come in numbers. They are amazing people who appreciate good football."