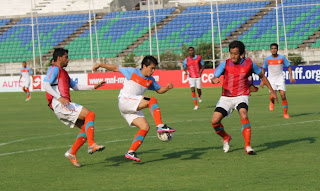 It was at the 2008 AFC Challenge Cup that Sunil Chhetri announced his arrival in international football – his hattrick in the final earning India a ticket to 2011 AFC Asian Cup. Since then, he has been India's leading goal scorer and at the moment stays on 38 goals, four behind Baichung Bhutia's highest tally for an Indian at 42 goals. A day prior to India's first match in the 2014 AFC Challenge Cup qualifiers, the India captain spoke to AIFF Media about India's challenge, the areas where the team is focusing, reaction from the fans, India's opponents in the forthcoming tournament and much more.


Sunil Chhetri, they say, is synonymous with the AFC Challenge Cup.

(Smiles, shrugs his shoulder and smiles again). I just hope I can live up to the expectations. As a player it never comes to my mind as to which Tournament or match I am playing. I have always had one aim – to do well for my Country. This is a very important Tournament for us and we, as a team, will give everything we have.


Do you believe the fans are becoming a bit impatient and are starting to forget what we did in the Nehru Cup?

I'd say it's a normal reaction. Fans expect us to win every match and I don't blame them at all. It's all about the mentality. I try not to be bothered by it and carry on doing my job. Success and failures and the reaction will come and go.


It was a tale of two contrasting halves against Palestine – what do we need to do to maintain the momentum?

It was a tale of seven drastic minutes and we have nobody to blame. The positive part stays that we were the better team in the first half. But at this level, there can't be any room for excuses. We need to ensure that such a phase never hits us again. It's past for us but at the same time have taught us a lesson. We are working hard on that.


You have played both against Myanmar and even Chinese Taipei. What do you expect from them?

Chinese Taipei and Myanmar are very good teams especially Myanmar, as they are playing at home. We need to remember they would be backed by a vociferous crowd.

But first things first, and at the moment, we are concentrating on our first match against Chinese Taipei. We need to take one match at a time.


How much valuable is it for you to be moving to I-League tile-contenders Churchill Brothers on loan?

It's good but at the same time, it's an added pressure. There will be expectations as we are in contention to win the I-League this season. I have played two matches for them and am looking forward to joining them after the campaign in the AFC Challenge Cup 2014 (qualifiers).