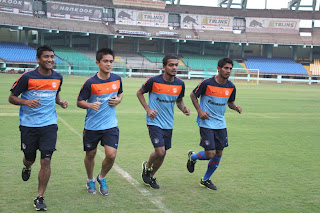 India Captain Sunil Chhetri who scored two goals against Guam in India's last match of the AFC 2014 Challenge Cup qualifiers feels the 'team plays well in such matches'. A day prior to the big day, Chhetri spoke at length to AIFF Media about what needs to be done, the intensity of the situation, the mood in the camp, his perception about Myanmar and much more.


What needs to be done in such a situation?

In such a Tournament, we need to realise that everything which we have done till now will nullify if we don't qualify from this Group – right from the Pune camp to the high intensity practice sessions to the two victories in two matches – everything will be valueless. We need to be very careful and aim for what we want to achieve.


What has been your perception about Myanmar?

They are a very tough team with good technical qualities. Let's not forget that they will be playing at home and be backed by a vociferous hostile support. But at the same time, we need to remember that we have bettered ourselves in the last two games. Everyone is ready for the task.


What is the mood in the Camp at present?

We are confident after the back to back victories which we achieved against Chinese Taipei and Guam. I personally believe we play well in such kind of matches as you are automatically charged up and the motivation level also stays high.


How does it feel to be back among goals?

(Smiles). Scoring goals makes me happy – in fact, that's a worldwide trend. I missed a couple of chances in the first match and getting two goals to my name adds to my confidence. I will try my best to find the back of the rival net in the match against Myanmar. But it just doesn't matter as to who scores as long as we qualify and achieve our aim.


Is Captaincy an added responsibility?

I had never believed it earlier but am feeling the responsibility a bit more now at the moment. I don’t know how good or bad I am, but am going my best to do my job. I need to admit that having players from the same batch – Subrata Pal, Syed Rahim Nabi, Gouramangi Singh, Syed Rahim Nabi, Mehtab Hossain makes my job easier.