Wim Koevermans: We could have scored ten goals! 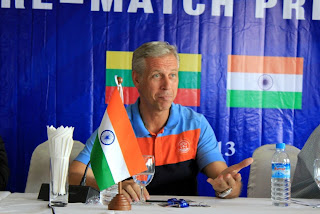 "We had aimed for three points and we have achieved it," National Coach Wim Koevermans pronounced at the post-match Press Conference after India's 4-0 win against Guam at the Yangon Training Centre earlier today.

"We could have scored more goals but it was Guam who had the first chance of the match when one of their shots hit the post and went out," he added. "That was a wake-up call for us."

"But after that, we took control and there was hardly any threat from our opponents. If you look back at the chances which we created, we could have scored more than 10 goals. But that's football," Wim maintained.

Referring to a question whether India can beat Myanmar, Koevermans quipped, "We are here to win. I feel every team is here to win too. It will be an interesting match for sure. But we have beaten higher-ranked teams in the recent past and we take inspiration from it."

"We gave away the ball a bit too easily at times," Wim maintained coming back to the Guam match. "There was pressure on the players as this was a must-win match for us. We had our chances but just couldn't score,” Wim reiterated.

In the end India won, while Myanmar were held to a surprise one-all draw by Chinese Taipei which leaves India at the top with six points.
Diposting oleh Unknown di 09.32