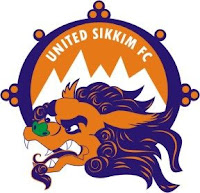 United Sikkim Football Club (formerly United Sikkim Sporting Club) was relaunched yesterday at Kolkata's Taj Bengal hotel announcing the squad for the 2nd Division I-League along with the launch of the new club logo which has been designed by Philippe de Ridder.

"As a national player for over a decade (more than 15 years), I had a dream to own a football club. I see it fulfilled today. It's a historic day. I wish to make United Sikkim a big name in India," said Indian football icon Baichung Bhutia yesterday.

A strong team has been put together for the 2nd Division I-League with internationals like Renedy Singh and N.S. Manju in the squad plus seasoned pros on the Indian circuit like M. Suresh, Kalia Kulothungan, Bijen Singh and Jiten Rai, young talents and some good foreigners in Japanese defender Mituski Ichihara and Liberian attacking player John D. Menyongar.

The owners of the now professional club were also named. The majority stakeholder is Dubai-based FidelisWorld, while Baichung Bhutia and musical maestro Shankar Mahadevan are other joint owners of the club. Baichung also tried to bring Bollywood star John Abraham on board, but that hasn't worked out.

Mahadevan of the Shankar-Ehsan-Loy musical fame, who composed the popular World Cup theme song 'De Ghuma Ke' said he wanted to compose something different for the club. Mahadevan said, "I am composing a song for the team. I hope it will be as popular as my previous songs."