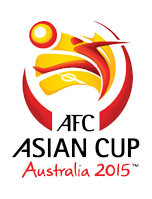 The Organisers earlier in the day revealed the logo for the AFC Asian Cup Australia 2015™ in Melbourne at the draw of the qualifiers. Designed by a Sydney agency, WiteKite, the logo depicts a stylised player, kicking a football from the east coast towards Asia. The ball also represents the Australian summer sun arcing west from Australia to Asia. The four golden bands forming the map of Australia represent the four host cities. The design is completed by the Australia 2015 script, in a relaxed personal hand-written style.

Michael Brown, CEO of the Local Organising Committee said that the logo reflects an event that will be a festival of football.

"It will be celebrated in January, the height of the Australian summer holiday season, so the colour palette is warm, festive and embracing of all participants from across Asia," he said.

"The logo needed to embody the values of the competition, represent the host nation and most importantly excite and connect fans, teams and stakeholders. We believe the designers have done a great job in achieving all three aims," Michael Brown ended.
Diposting oleh Unknown di 13.36