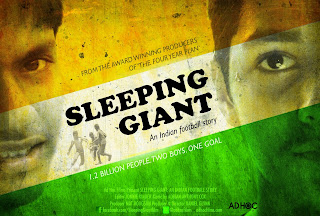 The documentary film 'Sleeping Giant: An Indian Football Story' had its world première at the 'Kicking & Screening Soccer Film Festival' ( festival link ) in London at the Everyman Cinemas in Belsize Park on Wednesday evening. I myself flew across from Düsseldorf to London to be there for the première as I myself am part of the documentary by giving my opinion, thoughts and insights on Indian football.

The Everyman Cinemas at Belsize Park is a small, cosy, old fashioned little cinema and it was the fitting location to show the documentary for the first time to the general audience besides also having some of the protagonists of the documentary present, many of whom had never met before.

The story of the documentary has two strings, one which follows the two winners of the 2009 South Mumbai Soccer Challenge, Hussain Vahanvaty and Shaun Fernandes, on their six week training trip at Queens Park Rangers FC in London after showing how these two boys were spotted at the South Mumbai Soccer Challenge and then the second string being the situation of Indian football.

Director Daniel Glynn, producer Mat Hodgson and their whole team at Ad Hoc Films worked close to two-and-a-half years to produce the documentary and I have to say, the outcome is a great piece of filmography!

After the screening première there was a Q&A session moderated by renowned British Indian journalist Mihir Bose which included director Daniel Glynn, producer Mat Hodgson, QPR youth coaches Steve Gallen and Marc Bircham besides myself, all who have something to do with the documentary. We did go into a little more detail about the Indian football though having little time to discuss it then taking about Indian football's situation could go on and on.

I thoroughly enjoyed being there for the première meeting a lot of old friends and making new one's and I can only recommend everything who is interested in Indian football or maybe even not, to watch the documentary.