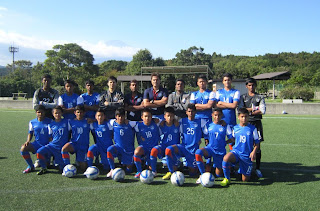 The India Under-14 Boys opened their campaign in the U-14 SAARC Tournament with a 2-1 victory over Afghanistan at the Tokinosumika Sports Centre in Shizuka, Japan. Striker Krishna Pandit scored both of India's goals in the first half.

Pandit opened the scoring immediately after kick-off. The goal scored after only 30 seconds was the fastest goal in the tournament so far. Krishna followed a Amey Ranawade pass and chipped it over the rival goalkeeper. The second goal came in the 5th minute off a set-piece movement. Ranawade again set-up the goal, when he made a run on the right wing and his cross was directed into the net by Krishna.

Changing over, Afghanistan went all out. But Jerry, Amit Tudu and Amey Ranawade in the Indian defence stood tall. Afghanistan eventually managed to pull one back in the injury time. in a match that was played in two halves, each of 25 minutes duration.

Head Coach Sajid Dar said i'’s important to stick to the philosophy. "This is a good exposure for us and overall development stays the priority. We played in a 4-3-3 format and the boys stayed keen in keeping possession all throughout."

Assistant coach, Goutam Ghosh lauded the boys for sticking to the basics. "This was the first time the boys played on an artificial turf and they adapted well. They implemented all has been taught in the training sessions."