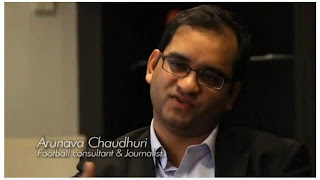 Tonight the documentary film 'Sleeping Giant: An Indian Football Story' will have its world première at the 'Kicking & Screening Soccer Film Festival' in London at Everyman Cinemas at Belsize Park at 21.00 GMT. I myself will be flying across to London to be there for the première as I myself am part of the documentary by giving my opinion and insights on Indian football.

Having seen the raw version of the documentary film it is simply great! A documentary about Indian football highlighting its strengths and weaknesses intended for a global audience should be something worth watching...

The documentary film has been made by AdHoc Films, the makers of the critically acclaimed documentary 'The Four Year Plan'. It is a journey of two young footballers from the South Mumbai Football Challenge to the Academy at Queens Park Rangers FC with contributions from eminent journalists and football specialists about the difficult subject of Indian football.

Shot over two and a half years, this documentary follows the young hopefuls from the backstreets of Mumbai to London, as they embark on an incredible journey to realise their dreams. Soon the age old questions of whether sport success is nature or nurture, talent or opportunity, are brought to the fore.

Director Daniel Glynn said about the film, "We've been given a privileged and unique insight into a country described as (actually your direct quote Arunava!) footballs last frontier."


Here for more information about tickets for the London première at Belsize Park:
http://www.everymancinema.com/advanced-sales/sleeping-giant