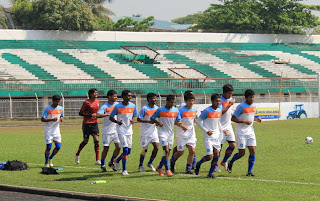 After their opening match 2-1 victory against Chinese Taipei, Team India is hoping to keep the momentum going against the Pacific islanders from Guam, who lost their opener 0-5 against hosts Myanmar.

"We needed three points in the first match," Captain Sunil Chhetri echoes. "That has set the ball rolling. We are prepared for the next challenge," he adds.

"There's no place for complacency," coach Wim Koevermans tells all. "Never underestimate your opponents. Never switch-off. If you do, you'll pay the price."

"International Football is all about fighting for every inch," Mehtab Hossain seems to remind you of epic Mahabharata's famous dialogue. "As the Coach said, we can never be casual. At the same time, we need to get over the tendency to concede," he quips.

"Goals never come easy. You need to toil hard to score. And once when you have done it, we need to hold onto that and capitalise further. When we score, it's a team effort. Likewise, when we concede, it's a collected failure," he maintained.

"Against Myanmar, Guam conceded some soft goals too. We can never take them lightly. There are quite a few US-base players in their squad," he informs.

For the record, two players from the Guam squad play in the MLS while three of them play in the Philippines League. "We've had a week's training camp in Thailand to allow our foreign-based players acclimatise," Guam's English Coach Gary White, informs. "We are very positive and confident. We have done our homework prior to coming here."

"We have been playing some good brand of football since the Nehru Cup. People may point to our international friendlies against Singapore and Palestine but we stayed dominant in both the matches," Clifford Miranda maintains. "Winning is a habit. We need to achieve it on a regular basis."

At the morning recovery session, the first XI which started against Taipei spends time with fitness trainer Pradip Datta, the others with Wim Koevermans.

"Syed Rahim Nabi and Robin Singh made the difference against Taipei. We did have possession and were definitely the better time but time was running out. Looking back, we should have settled it earlier," Chhetri pronounces.

The duo didn't care for anything else other than hitting the target during the morning session. One overheard goalkeeper Sandip Nandy asking Nabi in a jocular tone as to what did he have for breakfast. "You can hit the bird of the eye," Nandy added, as Nabi, by then, had perfected hitting at the two top corners of the net.

You walk up to Nabi. "Jeet-te hobey, jeet-te hobey," he repeats in Bengali (We need to win)."

"Come over boys," whistles Koevermans and then it starts again. Nabi by then was bulging the top-corners with the same consistency. Others clapped, whistled too.

Koevermans hasn't yet announced his final XI as yet. The kick-off against Guam at the Yangon Training Centre tomorrow is at 4pm local time (3pm IST).