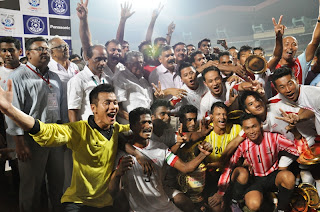 Services needed penalties to defend their Santosh Trophy title in the final of the 67th edition of the competition against the co-hosts Kerala at the Jawaharlal Nehru Stadium in Kochi to win their overall third title.

Kerala right-back Surjith's shot hit the horizontal and the Services players erupted in unbridled joy. For the visitors, Dhanji Singh, Sharwan Kumar, Dileep M. and Kiran K. Varghese scored while two shots were saved by Kerala custodian Jean Christian. For the hosts, Rino Anto, Abdul Basid and Sarath B.T. found the back of the net.

After the game Services striker Lalian Mawia was adjudged the Man of the Match.

It was always going to be a battle of who blinks first. And Kerala blinked, but not without a fight. A riveting essay of 120 minutes which needed penalty shoot-outs to settle the dust, the final of the National Championships gifted the 35,000 odd spectators a great game of football.

Congratulating the Services team, AIFF General Secretary Kushal Das said, "I congratulate the Services team for winning the 67th Santosh Trophy. It was a great game of football and I am overwhelmed with the turnout. It must be very motivating for the players as well playing in front of a full house. Overall, the ambience was amazing."

At the closing ceremony, Chief Guest the Kerala Chief Minister Oommen Chandy was introduced to the players of both the teams and officials, while he was accompanied by Kushal Das along with K. Babu, Chairman of the organising committee and Minster of Excise, Fisheries, and Ports of Kerala; K.M.I. Mather, President of Kerala Football Association and Executive Chairman of the Organising Committee.

Coming to the match, it was end to end stuff from the first whistle. Amidst deafening chants came Kerala's first real chance in the 11th minute. Kannan – shrugging off his injury and playing in the final – latched on to a cross from the midfield inside the 18-yard box but his strike brought out the best in goalkeeper Nano Singh of Services. Usman then dribbled past defenders in the 15th minute but his shot lacked sting and went straight into the hands of the custodian, who was the busier of the two in the opening exchanges.

The visitors though had one golden opportunity to surge in front as early as in the 6th minute. But the hero of the second semifinal Lalian Mawia shot over from inside the box. Mawia had another chance to make amends in the 25th minute when he was set up on top of the box by Subrata Sarkar. But this time the goalkeeper Jean Christian blocked his effort.

Change of ends saw no change of fortunes for either outfit. They played with same verve but the elusive goal was not coming. If Kerala's rearguard must be credited for their assiduity, the defending champions' custodian Nano proved to be a rock under the bar. The midfield battle was intriguing too as both the finalists could successfully read each other's moves, thus increasing the interception rate.

The crowd was getting impatient as time wore on and so were Kerala. Sajith's jinking run from the heart of the defence was testimony to their impatience. But the centre back was intercepted on the edge of the box by his counterpart Sumesh P.S.

In extra-time, Kerala looked the more purposeful side. Not only did they raid the rival citadel frequently, but the hosts also defended sturdily. Goalkeeper Jean Christian deserves a special mention here for his couple of acrobatic saves.

Usman came closest twice in each half. His shot off Shibin Lal's spadework flew inches over the bar in the 105th minute. Early on in the second half of extra-time, the striker's effort hit the chest of the goalkeeper after he was set up by substitute Nazarudeen beautifully.

Services lacked teeth upfront and the reason was the absence of their top goal getter V.V. Farhad due to injury. Kerala also missed the services of left winger Vineeth Anthony. It of course did not matter at the end.