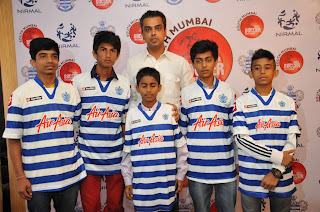 Today on the eve of their training trip to London, Rudolf D'Souza (13), Arfat Ansari (15), Tanaay Shah (15), Uzair Ansari (15) and Praful Kumar (16) were felicitated by South Mumbai MP Milind Deora, who is also the Minister of Sstate for Communications & IT and Shipping in Mumbai.

These selected winners were part of the annually conducted Milind Deora Soccer Championships for kids to exhibit their football skills. Since its inception in 2009, the championship has seen a steady increase in the number of participants, with over 4,000 kids participating in its last edition. Kids from various schools participate in this championship which include municipal, government aided and private schools. The aim of the championship is to bring together the community, while providing a uniform platform for kids across all strata of society to test their football skills. The event was sponsored by Coca Cola India, Nirmal Lifestyles and was partnered by the famed English Club, Queens Park Rangers. 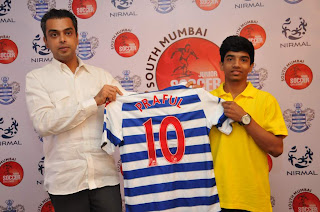 Speaking at the event Milind Deora said, "This is the second set of winners that we are sending to the QPR specialized training facility in London. We had started this championship with the aim to bring the South Mumbai community together and a steady increase in the number of participants has only strengthened our resolve. Through this exercise we are able to inculcate global football skills in our local talent. Through the years I have witnessed a lot of passion for football in Mumbai's youngsters. And this initiative is able to give them a first step in the right direction. I am hopeful that we would soon witness a national player arise from this grassroots football championship."

He added, "Sports should not merely be limited to following scores or watching telecasts on TV. It is imperative for the youth to participate in sports from a young age, irrespective of what sport they choose. It is important for kids to step out and participate in activities of physical and mental development."

Rudolf D'Souza, 13 year old student from St. Mary's school in Mazgaon said, "It is a dream comes true for me. I watch players of English Premier League play for their teams and always wondered if I would get to play like this. Now through the Milind Deora Soccer Championship, I have a chance at not just meeting them but training like them. I am looking forward to the next three weeks and hope to learn a lot."
Diposting oleh Unknown di 09.20