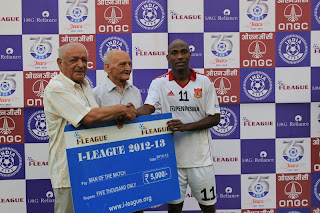 Pune FC ended ONGC's fairytale run at home by edging past the latter courtesy a James Moga first half injury time goal in the I-League Round 24 clash at the Ambedkar Stadium here today.

This was ONGC's first loss in their own den since coach Santosh Kashyap took over the reins in November 2012. While ONGC dropped to the ninth spot with 30 points from 24 matches, Pune FC reclaimed their third position bagging 40 points from 22 outings.


The visitors had a golden opportunity to take the lead in the first minute itself. But Eric Brown saved the hosts' the blushes with his goalline clearance off a James Moga effort. Pune FC had the better of the exchanges from then on with Izumi Arata playing the role of a schemer to perfection. The Indian international was all around the park creating goalmouth chances aplenty for Moga and Douhou Pierre. One such move saw Pierre in the clear but his shot sailed over the bar. ONGC were uncharacteristically off colour at home where they have not lost since last November, a 2-4 against Air India. Their key Japanese playmaker Yusa Katsumi failed to find his feet and his colleagues up front lacked purpose too.

In the end South Sudanese striker Moga volleyed home in injury time of the first half after being fed by Ivorian Douhou Sey Djidja Pierre who cut past two defenders to thread the pass.

Pereira's wards started the second half like their first. Pierre's effort was palmed away by ONGC custodian Rehenesh T.P. but not to safety. Unfortunately for Pune FC, there was no one at the other end to meet the ball on the rebound. Pune continued to pile on the pressure. In the 62nd minute, Moga was beautifully set up by Pierre only for the former to skew it over. Three minutes later, Othallo Tabia headed wide from close.

Of the few chances ONGC got to draw level, Katsumi drilled a gilt-edged opportunity wide in the 71st minute off a Brown floater from the right wing, while Brown himself came close to scoring twice in the last ten minutes of the match.