The India Panel at the Soccerex European Forum 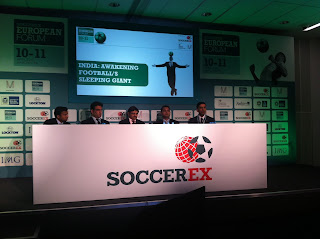 For a second year running the Soccerex European Forum gave a platform for Indian football to showcase itself on Thursday, April 11 afternoon with this years panel having the title 'Awakening Football's Sleeping Giant'.

The aim of the session was to shed light on the Indian football market besides giving a positive outlook to the international football fraternity, whose most generic question has been for years, when will the 'Sleeping Giant' finally wake-up and be a player in the global football business.

That question could not be answered by the session, but one key statement came from Vivek Narayan when he said that the Government of India had received a new draft proposal from FIFA on hosting the 2017 FIFA Under-17 World Cup, which the world governing body would like us to host but for that certain regulations would need to be changed.

Rajpal Singh spoke about the role of FICCI as being a bridge between the government and sports federations, while also organising its own events as FICCI Turf and FICCI GOAL in bringing the different stakeholders together.

Kunal Dua spoke about what Panasonic India has done to activate football as a marketing tool, but also using Bollywood and Cricket stars for its promotion. He also spoke about what Indian football needs to do to attract further sponsorship.

Shirish Kulkarni spoke from a perspective of a team owner of a 2nd Division I-League club in DSK Shivajians FC, which gave a different insight then the other speakers and also some infos on the I-League Franchise expansion plan.

In the end the session gave a positive outlook though the problems became evident when the Q&A session was held and the people present asked the tough questions.
Diposting oleh Unknown di 02.00