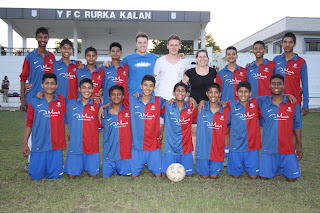 Youth FC in Rurka Kalan, Punjab has had the pleasure of the company of three sports scientists from Coventry University – UK in Jamie Whitehouse, Richard Payne and Lynsey Wilson.

The aim of their visit was to initially build on the work implemented by previous visiting students from Coventry University. Furthermore they aimed to implement strength and conditioning training programmes for the differing age groups of trainees at YFC, perform fitness testing and nutritional analysis and develop coaching plans in conjunction with the YFC coaches. There was also a focus on correction and analysis of proper techniques which will help to prevent future injuries and enhance the player’s performance.

The fitness testing was carried out by the scientists at different sites around the region to broaden the data to be analysed. The fitness testing is carried out with the aim of developing the programmes for the trainees based on the strength and weaknesses of the player’s performances. The data will also be used by the scientists to analyse the differences between players in the UK of the same age as those at YFC. This will highlight any differences in fitness levels between the two. The professional aims of the scientists have been met through the combined efforts of YFC and the trainees. Repeat exposures to new methods of coaching have been shared through structured sessions and multiple hours of training by the teams. 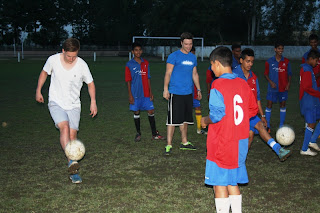 The benefits of the visit for YFC included strength and conditioning programmes set up to develop the power and speed of the trainees. Concise nutrition advice has also been developed to ensure optimal performance for every player of YFC. Paramount to the visit was the personal development of relations between YFC coaches and the scientists from Coventry University which will ensure that collaborations continue in the long term future.

“This incredible experience has not only developed my students in terms of confidence, knowledge and ability but it has really opened my mind to the difficulties faced by the children of India and the amazing work done by Sony, and the trustees of YFC. I am sure that their kindness and hard work has enabled many children to have a better life than they ever dreamed of and the YFC’s continued work will help many more,” Lynsey Wilson said.

Future aims of both the scientists and YFC will be on-going support and communication through both email and phone/video conferencing. Materials and data will be sent regularly to ensure that the good work set up through this visit will continue for the future.

“It has been a privilege to meet and work alongside all the people at YFC. They are changing lives of young people in India and I am delighted to have played a small part in this. I will definitely continue to support them in the future,” Richard Payne said.

“A unique experience with treasured memories! The work done by Sony and the YFC is life-changing and I feel proud to be a part of the on-going development,” Jamie Whitehouse said.
Diposting oleh Unknown di 06.03