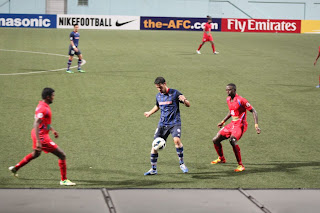 I-League table toppers Churchill Brothers SC suffered a one goal loess to Warriors FC in their Round 4 match of the AFC Cup at the Jalan Besar Stadium yesterday night. The result preserved the Singapore club's slender hopes of qualifying for the knockout stage and extended the away woes of the Red Machines while also confirming the passage of Indonesian champions Semen Padang to the last 16 of the AFC Cup.

Semen, who beat Hong Kong side Kitchee 3-1 earlier on Wednesday, lead the group with 10 points, four ahead of Kitchee, six in front of Churchill Brothers and seven ahead of Warriors, with two games left. With Kitchee and Churchill Brother meeting in Pune in two weeks from now, the Indonesian side are assured of finishing in the top two.

The early momentum was with the home team, however, as they created two inviting chances in the opening five minutes, although goalkeeper Sandip Nandy was not tested on either occasion. The 38-year-old was however called into action on 23 minutes when he had to smother a shot from the right flank by Warriors midfielder Tatsuro Inui, who had earlier seen his free kick take a big deflection away from goal. Churchill Brothers stepped up their game thereafter, as Steven Dias and Ashley Fernandes had a number of opportunities to test former Singapore goalkeeper Hassan Sunny.

But a failure to make those opportunities count haunted the Indian outfit, and after lightning caused a 30-minute delay to the start of the second half, they fell behind following some intense pressure from the Singapore Cup holders. Ruzaini Zainal led a counter-attack on the right for the Warriors on 53 minutes and sent over a cross which was intended for Mislav Karoglan but steered by Dharmaraj Ravanan into his own net instead.

It could have been 2-0 to the home side five minutes later as Inui dinked a shot from the left, only to see Nandy push his attempt away. Gabonese forward Henri Antchouet had the best chance to send Churchill Brothers level when he failed to connect with Arezou's square ball from the left on 65 minutes. Substitute Jaison Vales and Sunil Chhetri also had their opportunities, but their misses meant the I-League side were unable to salvage a point.

“With the players missing all those chances we had, we had to pay the price," admitted Churchill Brothers technical director Subhas Bhowmick.

"I am not disappointed, nor am I surprised. I had already said yesterday I would not be surprised if something bad happened in this match, but we have some very serious business back home in our league."

Warriors coach V. Selvaraj was meanwhile heartened to see his team clock their first win in the AFC Cup this year, adding that he still believes his team can reach the knockout stage.

"I think this win is very important to us," said the 42-year-old.

"The boys are starting to believe in themselves a lot more again, so I think they deserve this win. A win by an own goal is still a win for us; we created a few other chances, and the final score of 1-0 is what matters."
Diposting oleh Unknown di 05.33