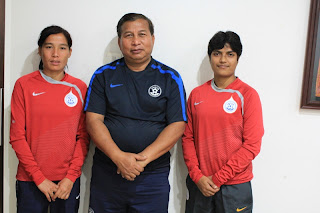 The Indian Women's national football team will be coached by Anadi Barua in the 2014 AFC Women's Asian Cup qualifiers in which India face hosts Palestine, Myanmar and Chinese Taipei in May 2013.

The qualifying Group D would be played at the Faisal Al Huseni Stadium in the West Bank, Palestine. India open against Myanmar (May 21), then face Chinese Taipei (May 23) and then the hosts Palestine (May 25) in the final.

The AIFF meanwhile have called-up 36 players for the India Women's team probables camp to be held in Pune from April 1 ahead of the qualifiers. The team will visit Nepal and Bahrain before proceeding to Palestine for the qualifiers.