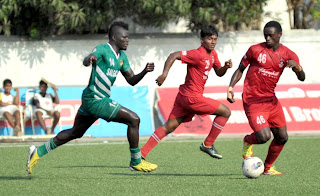 I-League leaders Churchill Brothers SC dropped further points into their title challenge when they were held to a goalless draw by Goan rivals Salgaocar FC at the Duler ground in Mapusa this afternoon. Churchill Brothers now have 44 points from 21 matches, while closest challenger East Bengal Club have 41 points from the same number of matches.

Needing a win to open up a comfortable lead at the top, Churchill Brothers started aggressively but could not translate their domination into goals. The Red Machines were also hampered by injuries to influential Brazilian midfielder Roberto Mendes Silva and wing-back Yumnam Raju Mangang, both of whom had to be replaced within half an hour.

Salgaocar FC too were keen to continue with their winning run and move further away from the relegation zone. The David Booth coached side played methodically and had their strikers been more sharp, they could have got something out of the game.

Randeep Singh first tested the Churchill goalkeeper Sandip Nandy with a long ranger which experienced Nandy parried away for an abortive corner. Minutes later, Francis Fernandes tried the same tactic but his booming shot sailed past the post.

At the other end, Sunil Chhetri and Henry Arnaud Antchouet Rebienot made some good runs but didn't come up with anything special that could trouble Salgaocar goalkeeper Karanjit Singh. The only time Karanjit needed to be at his best was when T. Bineesh Balan made a solo run but he could not get past the goalkeeper.

In the second session, Salgaocar saw more of the ball but failed to beat a determined Sandip Nandy under the horizontal bar, who was later adjudged as the Man-of-the-Match.