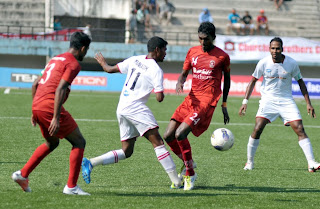 Churchill Brothers SC moved to the top of the I-League table with a 3-0 victory against Air India at the Duler Stadium in Mapusa on Tuesday afternoon. Churchill Brothers now have 42 points, while Air India stay on 18 points with both teams having played 19 matches.

The Goans had the perfect start in the 7th minute as winger Steven Benedic Dias won them a penalty in the seventh minute after receiving a Bineesh Balan ball in the danger zone, but he was brought down by Air India defender M. Pradeep, prompting the referee to point at the stop. Brazilian Beto stepped-up and scored.

Churchill Brothers got their second goal in the 22nd minute when midfielder Lenny Rodrigues sent a delightful through ball that pierced the rival defence and was intercepted well by Henry Arnaud Antchouet Rebienot who drew out goalkeeper Sukhwinder Singh and scored another easy goal.

In the second session, Churchill Brothers scored their third goal once more through Gabon striker Henry, and it was another gift from Air India as goalie Sukhwinder Singh messed-up a regular back-pass which we should have easily collected but instead the keeper and Rahul Bheke looked at each other allowing Henry to tap inside an open goal.

Air India had plenty of chances to get something out of their game but the visitors lacked the sharpness upfront. Nigerian striker Henry Ezeh had two clear chances but he aimed straight at goalkeeper Sandip Nandy's body while Micky Fernandes' two booming free-kicks missed the target narrowly.

Churchill next play ONGC in Delhi on Saturday and have a chance to open up a five-point lead at the top, while Air India travel to face another title contender in East Bengal Club in Kolkata on the same day.