Lajong Coach Thangboi Singto: Every match is like a Cup match! 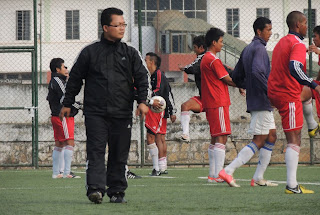 Thangboi Singto took over as the Coach of Shillong Lajong FC in January 2013 from Desmond Bulpin with the club stabalizing after a difficult season. Talking to AIFF Media in a freewheeling interview, Singto spoke on the transition in the style of play, the challenges of taking over the reins midway, Ex-Under-19 Portugal striker Edinho Junior, who came on loan from Blackburn Rovers, Lajong's aim and much more.


Since you took over, Shillong Lajong FC's turnaround has been dramatic. What different have you done to the squad?

There is nothing hugely different which I can do. It depends on the quality of players you have. I had my own philosophy and it's the players who are responding and implementing it on the pitch. I insisted on building up from the back and playing possession football as most of our players are technically sound and short in height. At this juncture of the League, you need to stay fit. I reiterate the players have done it, not me. They have responded in style.


Lajong's style of play seems to have changed and there's been a deviation from the long-ball strategy. How difficult was implementing it?

It was not very difficult. Eleven players on the football pitch want to play with the ball - isn't it? My philosophy of building from the back and playing possession football ensures that everyone gets the ball and can move around. This gives each player the confidence as well. Previously, not all used to get the ball as they had to play it long immediately after receiving.

Football is all about making the correct decisions at the correct time. Decision making stays the most important aspect. I am a firm believer in that.


Was it difficult to take up the reins midway?

I'm grateful to the management for showing tremendous faith in me. My association with the club is for long. Since 2008-09 I have been with the club. So I knew the structure and the talent which was available. I knew the areas to be worked upon and was no stranger. Otherwise, it is always very difficult to fit into from mid-season.


How has your new recruit former Under-19 Portugal International Edinho Junior settled in?

I would not like to single out one player as football is a team game. But since you asked, I would say that Edinho (Junior) is an exceptional talent. We are proud that we have him with us on loan from Blackburn Rovers. He is bonding well and has great football expertise. His brace against Pune FC was spectacular.

Other foreigners in my team are good as well. (Sho) Kamimurah also scored two goals on debut against Air India. Besides, Taisuke Matsugae, Minchol (Son) are also very talented.


Do you believe that you are already out of the relegation zone?

Not at all! For us every game is like a Cup final now. I am taking one match at a time. We need to keep working hard and there is no room for slip ups.


Where do you want to finish this season?

The aim was to finish in the top half of the table. But realistically we need to ensure that we play next season. Avoiding the relegation stays the priority at the moment. Ideally, I would want to see my team finish 9th.

SLFC already have a Youth Development Program in place. Tell us about the transition of the players into the senior squad.

'Promotion of Youth', has always stayed the philosophy at Shillong Lajong Football Club. We have seven players in the Senior Team who are U-20 players. That says a lot. I'm sure under the guidance of Mr. (Robert) Baan and Scott (O'Donell) all the clubs, including ours will go in the right direction.