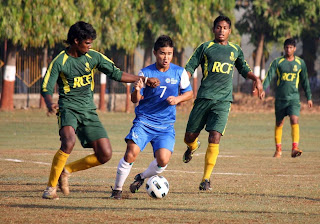 The AIFF Under-15 Regional Academy based in Navi Mumbai defeated Rashtriya Chemicals and Fertilizers SC 2-1 in a friendly match at the picturesque RCF Sports Complex in Chembur, Mumbai today. This was the fifth victory for the Academy boys on the trot.

Milan Basumataray and Bidyananda Singh scored one apiece for the AIFF Regional Academy who are based at the Father Agnel School premises in Navi Mumbai.

Milan opened the scoring in the 19th minute following a well-worked sequence of passes by the midfielders. He latched onto a through pass by Prasanth and slotted it past the rival custodian to put AIFF Regional Academy in the lead.

RCF SC, who compete in the top-tier of Mumbai football, the MDFA Elite Division, gradually worked their way back into the game before restoring parity at the stroke of half-time.

Changing over, AIFF Regional Academy sealed the fate of the game in the 74th minute when Bidyananda went past three defenders before unleashing a powerful shot which bulged the net.