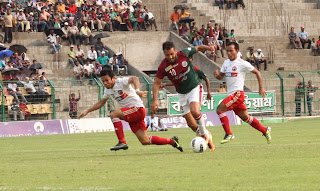 Kolkata giants Mohun Bagan AC were held to a two-all draw by Shillong Lajong FC in a match against relegation of the I-League Round 22 at the Kalyani Stadium this afternoon. The Mariners twice took the lead, but on both occasions the team from the Northeast equalised.

The first session did not see much action as both sides took a defensive approach. Mohun Bagan had the first opportunity in the first quarter that saw Syed Rahim Nabi missing a header from close range, while Lajong FC also had their share of chances. The first attempt, coming in the 37th minute off their young Portuguese striker Edinho Junior, which was tipped over by Mohun Bagan goalkeeper Shilton Pal. Lajong FC's Japanese midfielder Taisuke Matsugane missed another sitter when a Mohun Bagan defender failed to clear a midfield floater giving the former an open chance in the 43rd minute.

Mohun Bagan returned with more purpose after the break and found the lead in the 51st minute when Tolgay Ozbey showed his class after being set free by a nice through from his strike partner C.S. Sabeeth. But before the green-and-maroon could settle down, a brilliant swerving shot from Boithang Haokip restored parity.

Mohun Bagan continued to attack and restored the lead through substitute Manish Maithani, who came after the break for Sushant Mathew. The Mohun Bagan midfielder scored from a nice long-ranger on the hour mark renewing the home side's hopes of a win and the necessary three points.

But the doggedness, that marked Shillong Lajong FC's performance in the match, came to the visitors' aid as they found the equaliser yet once again.

P.C. Lahlimthara Mahlima, who replaced Eugeneson Lyngdoh Mawphlang in the 74th minute, nodded home the Lajong goal just three minutes after coming on when his midfield colleague Boithang Haokip set up a fine floater on the Mohun Bagan goalmouth. The match ended two-all.

After the draw Mohun Bagan have 10 points from 17 matches while Lajong FC had 21 from 22 matches with the fight for survival still on for both sides.