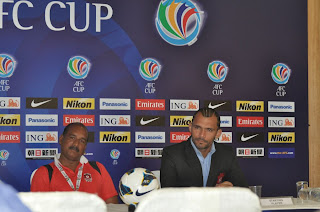 I-League side Churchill Brothers SC will face Indonesian side Semen Padang in their Group E Round 2 match of the AFC Cup at the Shri Shiv Chhatrapati Sports Complex in Pune tomorrow. After their opening round loss against Kitchee SC, the Red Machines will hope for a better result this time around.

The Goan side could miss the services of Indian international Lenny Rodrigues and T. Bineesh Balan due to light niggles, but will certainly miss Afghanistan striker Belal Arezou who has still not arrived in India due to visa issues while Gabon striker Henri Antchouet had to fly back to Portugal for personal reasons.

Meanwhile Semen Padang are missing all four of their foreigners. One is injured, while three players faced issues with their Indian visas.

At the pre-match press conference coach Mariano Dias said about the opponent, "haven't seen them (Semen Padang) play however we have read newspaper reports and know that they are a strong side and are top of the Indonesian league."

"And yes the travelling is very hectic, it does take its toll on our players, however that is part of football and we must deal with it in a positive way and go out there and try to win the match tomorrow."

"The AFC Cup provides our players with the opportunity to improve their game by playing against good foreign sides," Mariano further added.

Churchill Brothers captain Beto said, "It is my dream and a huge challenge to win the AFC Cup for an Indian side. Although we lost the first match, I am confident that our team will play a better game tomorrow and hopeful of three points."

When asked about the partnership with Sunil Chhetri, Beto said, "this is not the first time we have played together, we played at Mohun Bagan, we also played together at Dempo, I am sure we will combine well and help our team get all three points."

Meanwhile the Semen Padang coach Jafri Sastrak said, "we have travelled a long way and are hopeful that we will take home all three points. We will be missing all four foreigners tomorrow, one injury and three visa problems, however we are confident that our local players will give their all and help us win."

"We have watched some match footage on YouTube and look at Sunil Chhetri and Beto has the main threats."

About the stay in India he added, "it has been brilliant so far, we would like to thank Churchill Brothers for their hospitality!"
Diposting oleh Unknown di 09.00