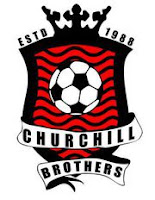 Goan giants Churchill Brothers SC have named their final 20 players squad ahead of 34th Federation Cup in which the Goans have been drawn in Group B along with Air India, Mohun Bagan AC and qualifiers Mohammedan Sporting Club with the matches to be played in Siliguri.

The Red Machines under Subhas Bhowmick have been drawn in a tricky group and knowing that only topping the group would enable them to progress puts added pressure on a newly put together squad of experience and young talent.