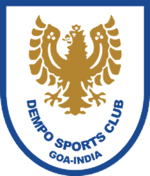 I-League champions Dempo SC have named their final 20 players squad ahead of 34th Federation Cup in which the Goans have been drawn in Group A along with Mumbai FC, Pailan Arrows and Shillong Lajong FC to be played in Jamshedpur.

The Dempo SC squad has a familiar look with 19 of the 20 players having played for the club last season with only Japanese recruit Ryuji Sueoka new to the squad. The new signing Rohan Ricketts, an ex-English Premier League player, is missing from the squad due to work permit issues and he would join Dempo's after the Fed Cup.