The first-ever miniEURO set to be played in Moldova! 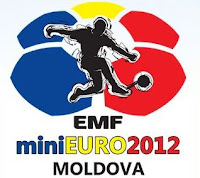 After the success of Euro2012 and the 2012 London Olympics, the year of sport will see another highlight as next week a brand new era in small sided football begins.

The Moldovian capital of Chisinau is the host city for the first ever miniEURO tournament, a three day event, kicking off on September 21, which will see the national teams of no fewer than 16 Countries battle it out to see who will become the kings of European minifootball - United Kingdom, Romania, Greece, Czech Republic, Germany, Turkey, Italy, Israel, Slovenia, Croatia, Slovakia, Moldova, Cyprus, Bulgaria, Kazakhstan or Montenegro.

The innovative and exciting tournament is the brainchild of the European Minifootball Federation (EMF) which formed earlier this year in an attempt to bring together all the national organisations that look after minifootball throughout Europe only for amateur players.

EMF President Razvan Burleanu said, "The fact the miniEURO Moldova 2012 is upon us really is the realisation of a dream for all of us. Being able to see 16 nations all come together to celebrate minifootball is something really incredible for thousand of amateur players who take part in this moment at the European level – more than 600.000 players."

The miniEURO Moldova 2012 sees countries as far apart as Israel and Kazakhstan competing for the title of Minifootball Champions of Europe, a title that will be the most prestigious in small sided football. Some of the games will be shown live on Moldovian television, with all the other countries having camera crews on hand to record the tournament.

One of the key objectives of the EMF is to promote minifootball throughout Europe and to combat any discrimination through competition and there is no doubt that all 16 countries coming together for a celebration of sport is a key part of that. The tournament will be the first of many, but the first one promises to be very special with the best players and coaches from all over Europe making final preparations for the trip.

The draw for the final groups will be announced on Friday in Chisinau. All 16 teams will be drawn into four groups of four teams with the top two reaching the quarterfinals. The competition is then played as a straight knockout.

European Minifootball Federation, as the minifootball governing body at European level, has the purpose to promote, supervise and direct minifootball in Europe, as a means to contribute to the positive development of society. European Minifootball Federation was formed in March 2012 to promote the minifootball as a tool for health-enhancing physical activity, development, equal opportunities education, training, social inclusion and integration through sport and combating racism and other forms of discrimination in sport.
Diposting oleh Unknown di 06.26