I.M. Vijayan: Kerala are peaking at the right time 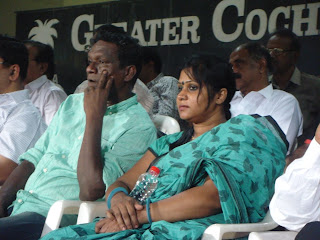 When on the field Kerala striker Shibin Lal broke into an uninhibited jig with his teammates after scoring the winner against Maharashtra in the first semifinal of the 67th Santosh Trophy on Thursday, off the pitch I.M. Vijayan – arguably the Greatest footballer of his generation and an icon in Kerala – jumped out of his seat in joy, rejoicing in a manner we have so often seen him celebrate after scoring a goal! The 'Black Pearl' of Indian football was accompanied by his wife Raji Vijayan.

"I am very passionate about football in Kerala and with the team playing so well throughout the match, I was so engrossed in watching the match that I did not speak to her (my wife) for a while," Vijayan confessed, grinning.

"I last spoke to her before the match I believe. At half-time I was busy with some other commitments. After the winner by Shibin I hugged her in joy and was ecstatic. She is well versed with my fervour for the game," added the Arjuna Award winner, tongue in cheek.

Coming to the semifinal, Vijayan felt that the hosts blossomed against top sides and this can be their advantage going into the summit clash. "The quarterfinal league matches were not challenging enough. This one against an in-form Maharashtra was our real test and the boys showed character to come out on top. The likes of Usman and the entire midfield played really well," he maintained.

"Shibin's winner was superb and sweetly timed. We played well in crucial junctures like the last 10 minutes of regulation time and extra time. The backline needs to be credited as well. Kerala are peaking at the right time."

The 15,000 odd spectators played their role too according to Vijayan. "The Kerala crowd is known for its vociferous support. It was no different here Thursday. Still I am expecting a packed stadium on Sunday. During our times we used to have full houses and the feeling was amazing. It gave you goose bumps," he went on.

"It takes a lot to perform in front of big crowds as the pressure to satisfy them is immense. The boys soaked up the pressure really well and the crowd as usual played its part in cheering the team to glory. Every move, every shot drew huge applause," concluded the legend.